The past few years have brought a transformative sonic and aesthetic overhaul to our rosewood 800 and 900 Series, along with our maple 600 Series. This year we’ve applied our creative strokes to invigorate the 500 Series in several exciting — and surprising — ways. The end result: a colorfully retooled series that delivers as much guitar-playing diversity as any in the Taylor line.

Taylor master guitar builder Andy Powers started with voicing refinements that would preserve all the great character of mahogany’s tone profile — an earthy midrange, a clear, focused response, and a natural compression that helps level out a player’s attack — while giving players a wider range of expression.

“The idea was to bring out more volume, low-end richness, and projection,” Andy says. “At the same time, we wanted the guitars to respond quickly to every type of articulation.”

The foundation of the revoicing efforts was a new internal bracing architecture that could be adapted to optimize the tone of the different kinds of guitar designs planned to live within the 500 Series. The bracing concept, dubbed Performance bracing, is grounded in the X-brace tradition with additional modifications that allow for subtle adjustments in shape and placement to influence how the top moves in relation to the back and sides.

A noteworthy tonewood update is a shift among spruce-top models from Sitka to Lutz spruce, a naturally occurring hybrid of Sitka and White spruce. Lutz tends to grow in climate zones between where Sitka and White spruce are found, and is considered very adaptive within those microclimates.

In terms of acoustic properties, Lutz blends the positive characteristics of Sitka spruce with White spruce and its close cousin, Engelmann spruce. The Lutz that Taylor has secured for the 500 Series comes from a particular area in Alaska where the wood exhibits characteristics of another historically desirable spruce for guitar tops: Adirondack.

“This is really good spruce,” Andy says of Lutz. “When combined with this new internal bracing architecture, the guitars are more powerful, richer and louder than before. You won’t be able to outplay those guitars. You’ve got some real horsepower there.”

For 2016, the Lutz is reserved for Grand Symphony and Dreadnought body styles, with mahogany-top editions of those shapes also offered. For Grand Concert and Grand Auditorium models, the top options will be cedar (512ce/514ce) or mahogany (522e 12-Fret/524ce).

“That cedar/mahogany pairing is wonderful, particularly in the context of a smaller body,” Andy says. “It’s warm, clear, rich, and easy-speaking.”

One of the benefits of the new bracing scheme is the ability to adapt it to enable the creation of some breakthrough guitar models. One example is a pair of 12-fret/12-string Grand Concerts: the cedar-top 552ce 12-Fret and mahogany-top 562ce 12-Fret. Although 12-strings aren’t traditionally associated with a smaller-size guitar body, the bracing design played a major role in articulating a clear 12-string voice for a more compact and comfortable playing experience.

Another unique design is a 24-7/8-inch-scale Dreadnought with a V-carve neck and slotted headstock. Two model options are available: the Lutz spruce-top 510e and the all-mahogany 520e. The shorter scale length and slightly reduced string tension create a softer handfeel that makes this a Dreadnought perhaps less suited to a robust, bluegrass-style picking attack and more compatible with a singer-songwriter who’s drawn to the Dreadnought aesthetic.

“This Dreadnought is a very comfortable playing guitar,” Andy says. “It responds well to chord strumming and has a focused and clear sound that accompanies a singer’s voice really well. With the shorter scale length, you get a crisp high end and a soft, almost squishy-feeling low end. Combining the dynamic response of the Lutz spruce top works especially well with the dry, woody sound of mahogany — you end up with a balanced overall voice that supports a lot of different kinds of music and plays well with other instruments.”

Another distinctive fretting-hand feature, the V-carve neck profile, was incorporated to give players an inviting handfeel that plays into the classic mahogany flattop personality of these guitars.

Aesthetically, the 500 Series retains most of its details with a few updates. New touches include a shift to faux tortoise shell binding with a matching rosette and pickguard (mahogany-top models come without a pickguard). On our all-mahogany models, a shaded edgeburst wraps the body and neck in vintage warmth.

Look for the new 500s at authorized Taylor dealers starting in February. 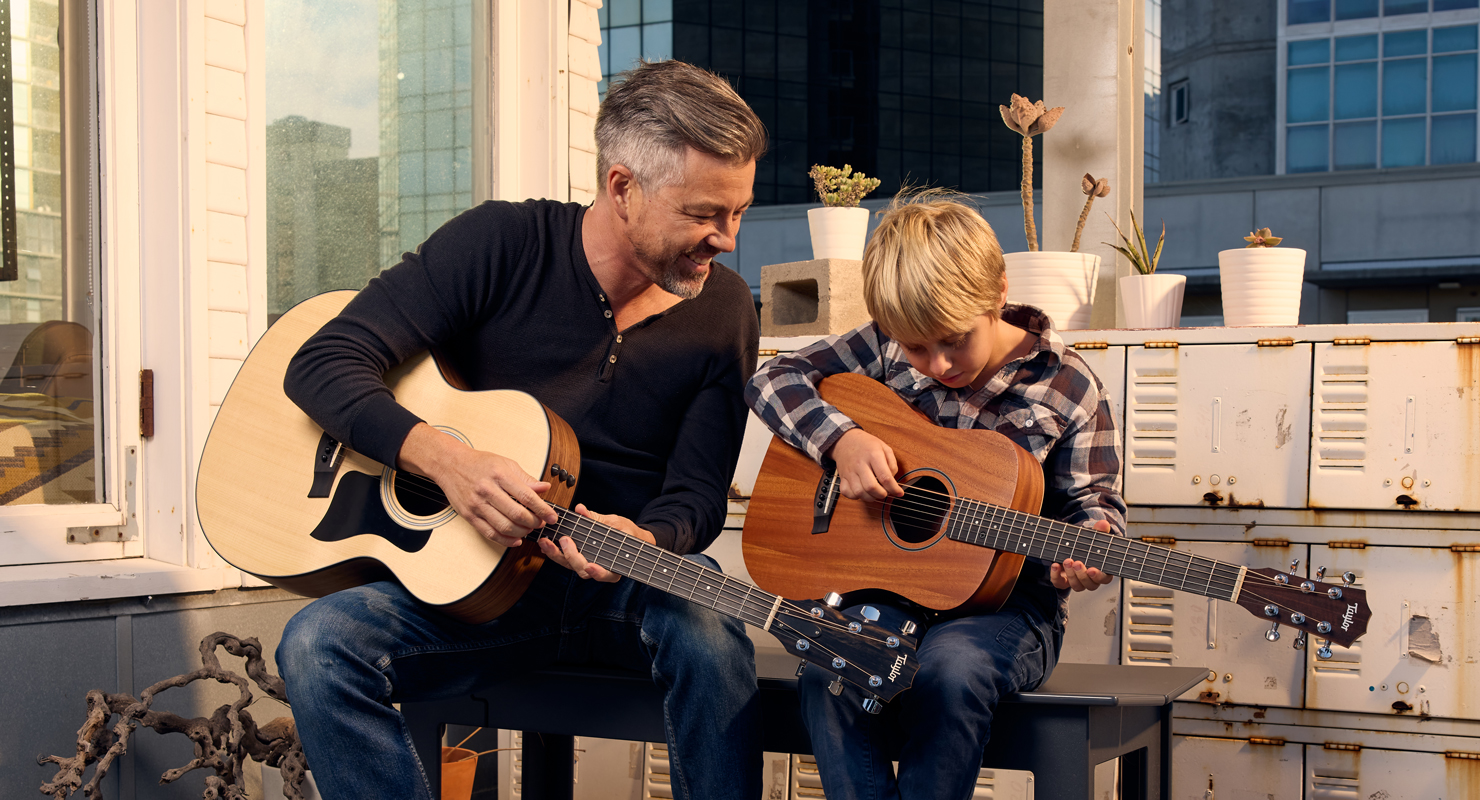 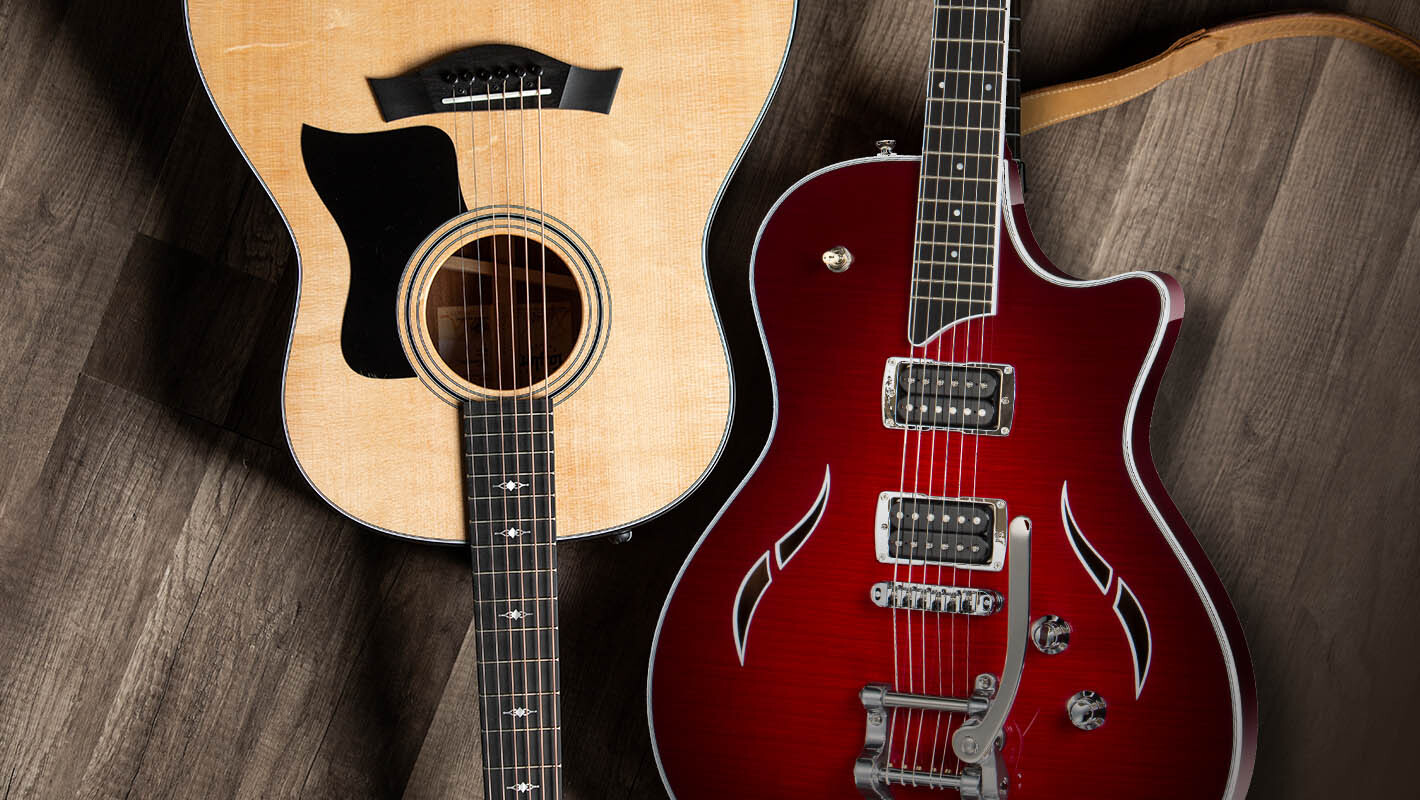 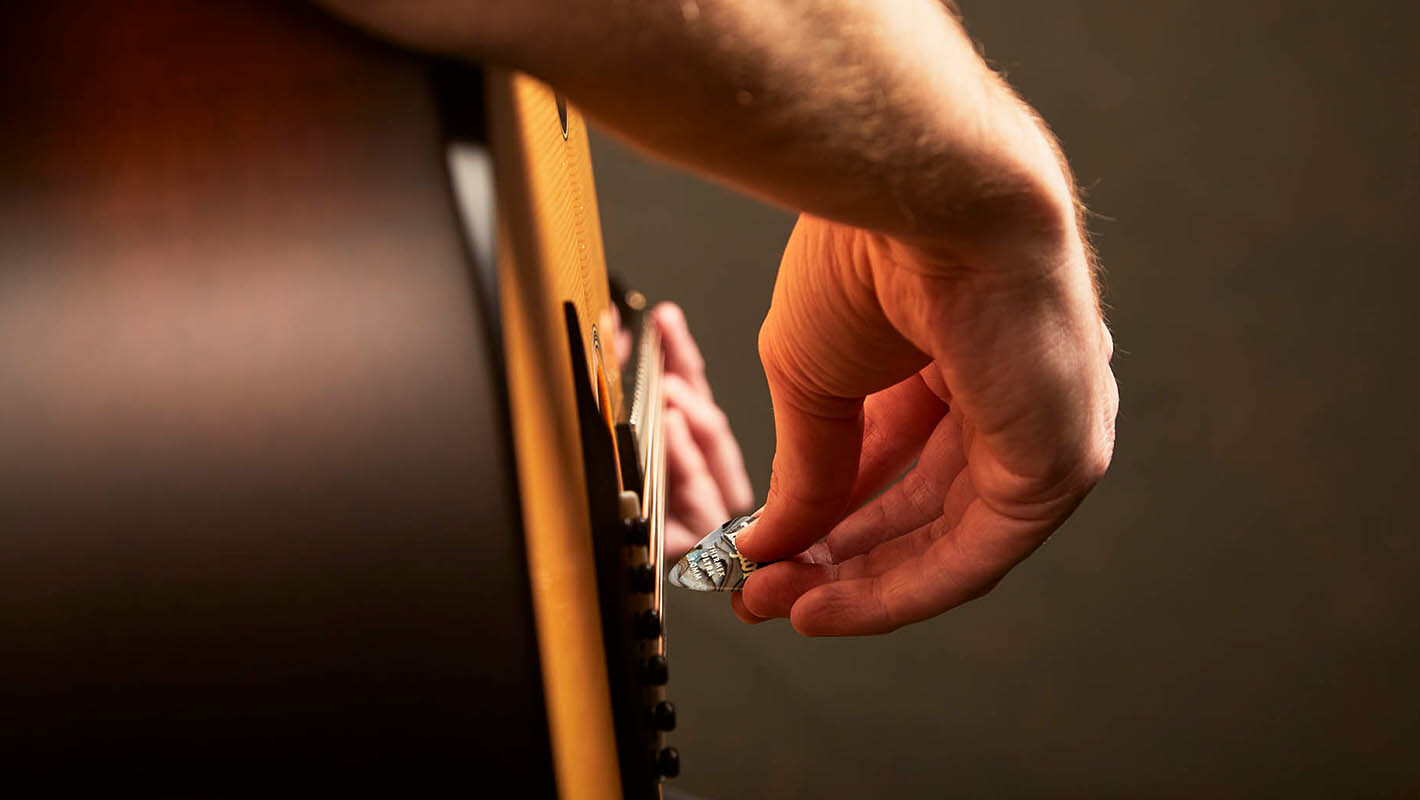 How To Hold A Guitar Pick

Aug 31, 2021
By: Colin Griffith
For such a simple tool, the guitar pick can profoundly impact the way we play… Continue Reading