Acoustic guitars may come in various shapes, sizes, and looks, but they all have one thing in common: they’re made of wood. Don’t let this commonality fool you, though—the type of wood used in a guitar’s construction is paramount to the way it sounds.

This fact means that two identically crafted guitars made with different woods will sound different. If you’re searching for a particular sound or are just curious about the sonic properties of acoustic guitar tonewoods, you’ve come to the right place.

Each guitar tonewood is unique with its own distinctive tonal characteristics. Let’s take a look at everything you need to know about some of our favorite tonewoods.

How Does Wood Shape a Guitar’s Sound?

Wood isn’t the only factor involved in coloring an acoustic guitar’s sonic qualities, but it is an important one. Even as we add pickups and other embellishments to modern acoustic guitars, it’s the wood that dictates the overall sound. But how? The answer lies in the physical properties of the woods and the way they react with each other.

First, it helps to understand the anatomy of an acoustic guitar. The body consists of a top (or soundboard, where the soundhole resides) and the back and sides. Vibrations from the strings set the top in motion; that sound then resonates within the body of the instrument.

The guitar wood types used in body construction are split into two categories: softwoods and hardwoods. The back and sides are always made of hardwoods, while tops generally lean towards softwoods (spruce is most commonly used) but can feature hardwoods.

As natural materials, these woods have different properties. One example is the compression effect that some tonewoods produce. Think of compression as an evening out of volume; the loudest sounds are dampened, while softer sounds are amplified. The increased density of hardwoods makes them more compressive than softwoods. As a result, guitars with hardwood tops will have a more focused voice and rounded attack; softwood tops have a more extensive dynamic range.

The movement of air inside the body is another key component of a guitar’s sound, and the wood type plays a role here, too. Back and side tonewoods are carefully chosen for the way they boost or cut specific frequencies as the sound resonates within. Picture the EQ settings on your stereo—changing the tonewood is like adjusting the bass, mids, and treble. A wood like koa has a bump in the high mids, while rosewood peaks at the highs and lows.

Tonewood characteristics also influence a guitar’s overtone profile and touch sensitivity (the amount the instrument responds to the player vs. natural characteristics of the wood).

Overall, describing sound is notoriously difficult. Using colors and temperatures to portray sonic qualities is like drawing someone a picture to explain the taste of a dish. As you read through this guitar tonewood guide, remember that sound is subjective, and wood choice is only part of the sonic puzzle. Still, this should give you an idea of what to expect from each wood.

The soundboard of the guitar is where it all begins. As you strum, the vibrations of the strings cause the top to vibrate via the bridge. Softwoods are favored here for their elasticity, though hardwoods have their applications.

There are dozens of tonewoods used for the soundboard—from the well-known to the rarest of the rare. We’ll be exploring some of our most common top woods and the guitars on which they feature.

This softwood grows naturally in the coastal rainforests of Western Canada and the US. It’s one of the most popular soundboard woods—and with good reason.

Sitka spruce is incredibly versatile, making it an appropriate top for players of all dynamic levels and styles. Though its tone is overall balanced, it leans slightly toward higher frequencies, producing a crisp, expressive sound. A guitar with a Sitka spruce top will have more of a focus on the fundamental—that is, the source note and its harmonics will take precedence over any overtones.

You’ll find Sitka spruce soundboards on the majority of Taylor guitars, from the beloved 114e to the striking, cutaway-adorned 414ce-R.

The Lutz spruce is a naturally occurring hybrid of the Sitka and White spruce varieties, found between British Columbia and Alaska.

A Lutz top delivers more power, richness, and volume than a Sitka top. As a harmonically complex material, Lutz spruce is very reflective of a player’s style. Most guitarists will find a Lutz soundboard appealing, but more aggressive players will feel especially at home with the added headroom.

To hear the qualities of Lutz spruce, reach for the entry-level Academy 12-N nylon-string or the dynamic 714ce.

Wander through the temperate forests of the Alaska panhandle down to Northern California, and you’ll find beautiful stands of Western red cedar.

This soft, red-tinged wood has a lower density than spruce, which lends it a warmer, “played-in” sound. Prominent low-mids and an abundance of rich overtones make Western red cedar a favorite among gentler players. Fingerstylists will appreciate the touch sensitivity of the wood; aggressive players may find themselves limited by the dynamic range.

The 512ce is a perfect example of the responsive warmth that comes with a Western red cedar soundboard.

Koa grows only on the islands of Hawaii, where Taylor Guitars is involved with reforestation and restoration efforts. Known for its striking beauty, koa is used as a body wood as well.

As a top wood, it starts out bright and punchy. But over time, koa mellows out, becoming warmer and sweeter through regular playing. It boasts a strong natural compression and a fairly balanced sound, with a slight favoring of the top end. A dense, bright hardwood, koa pairs best with fingerstyle players.

Discover the stunning look and sound of koa on the endlessly playable GS Mini-e Koa or the jaw-dropping K22ce 12-Fret.

The back and sides of a guitar’s body are generally made of a different wood than the top (though not always, as is sometimes the case with koa and mahogany). Because the back and sides act as a built-in “amplifier” for an acoustic guitar, the choice of wood is a fundamental part of the sonic recipe.

Let’s look at some of the most-used body woods, their properties, and where to find them.

Maple trees grow around the world in a band just north of the Tropic of Cancer. At Taylor Guitars, we source our maple from the Pacific Northwest.

Historically, maple has been associated with a bright, focused tone, quick attack, and rapid note decay. But we revoiced our maple guitars with our proprietary V-Class bracing to round out the sound and increase sustain. The result is a warm, rich voice that balances clarity and low-end resonance. It’s also very player-reflective, meaning the nuances of a person’s playing style will influence the sound, making maple a bit of a chameleon.

Guitars with a maple body, like the mighty 618e, are now more versatile than ever, responding to the player’s personal style.

Native to southern Asia (India, Pakistan, and Sri Lanka), Indian rosewood is one of the most popular body woods in the guitar world.

Rosewood owes its popularity to its rich low end and sparkly top end. As a wood-reflective tonewood, Indian rosewood is consistent; notes will ring out effortlessly alongside rich overtones. A slight midrange scoop leaves room for the vocal, making this versatile wood ideal for live players of any style.

We love rosewood, so you’ll find it on many of our guitars. Highlights include the classic 210ce Plus and the best-selling 814ce.

Mahogany grows throughout South and Central America, Florida, and the Caribbean. You’ll occasionally find mahogany soundboards, but as a hardwood, it’s more prevalent on the back and sides. Mahogany is also used for many of our guitar necks.

As a guitar body wood, its tone is often called “woody” or “dry.” Overtones are almost nonexistent; expect a direct and uncomplicated sound. With a midrange focus and some natural compression, mahogany guitar bodies fit a range of styles and genres—especially blues and roots. Players who dig in will be pleasantly surprised by the linear response.

As an all-mahogany guitar, the 522ce exhibits the warmth and charm of the wood.

Found in central West African countries like Ghana and Nigeria, sapele is a fast-growing wood.

Though tonally similar to mahogany, sapele shines with more top-end shimmer due to increased hardness. Like mahogany, it’s also fundamental-forward, balanced, and versatile, with more characteristics coming from the wood than the player. A guitarist wielding a sapele guitar is ready for almost anything, from heavy strumming to airy fingerpicking.

If you want to experiment with sapele, the sturdy AD27e and the adaptable 314ce are excellent jumping-off points.

Aside from the woods listed above, there are countless other varieties of tonewoods out there, all with unique sonic properties. Part of the excitement of playing the acoustic guitar is exploring the different combinations of woods. That same excitement drives our commitment at Taylor Guitars to building innovative, high-quality instruments. Each acoustic guitar tonewood has unique properties that make it special.

As you search for your signature sound, don’t forget that tonewood is only part of the sonic picture. Factors like guitar body size, pick material, strings and technique all influence a guitar’s sound.

Ultimately, the best way to experience a tonewood is to play it. Find your local Taylor dealer and drop in for a visit today. 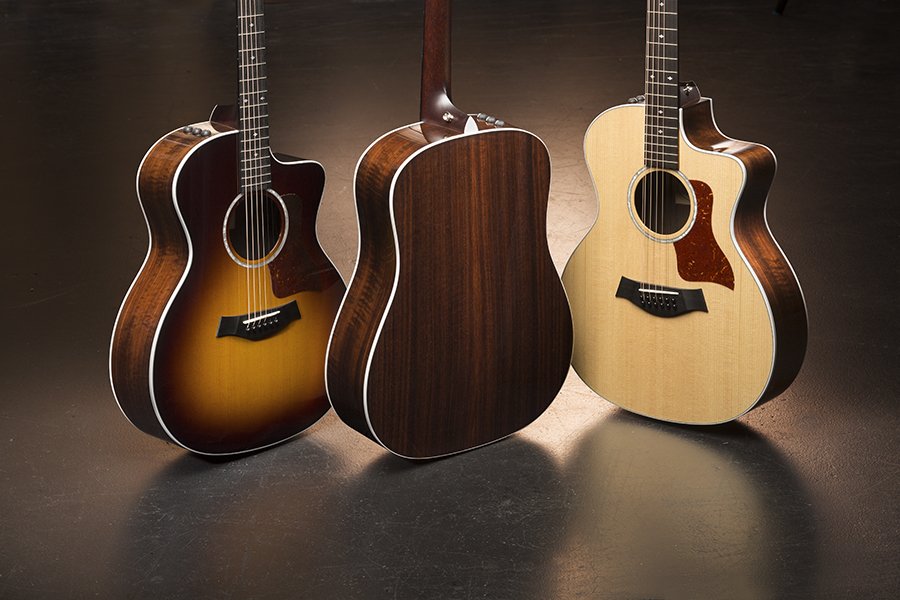