Scott Paul is Taylor’s Director of Natural Resource Sustainability. His Sustainability column appears in each issue of our owner’s magazine, Wood&Steel. This issue, he writes about the forces that determine how builders like Taylor source our prized tonewoods.

In recent years, Taylor’s sustainability efforts have received significant public attention. Nice articles have been written in Forbes (May 2019) and National Geographic (June 2019), along with a host of music industry outlets. Bob was even interviewed on BBC World News. We’re obviously proud of all this, but we were nonetheless surprised when the Society of Conservation Biologists asked Bob if he would give a keynote speech at their International Congress for Conservation Biology, held in Kuala Lumpur, Malaysia, this past July. In short, we said yes, and Bob and I traveled to the conference. The speech (“Sustain and Sustainability: Why a Guitar Company’s 100-Year Plan Includes Reforestation”) was well received, and we were grateful for the opportunity. The invitation, however, also provided a catalyst for Taylor Guitars to fine-tune our sustainability thinking. To be honest, much of our sustainability work to date has evolved organically over time. The Conservation Congress compelled us to further hone our thoughts and our message.

For several weeks leading up to the conference I would regularly stop by Bob’s office for a coffee. For several hours we would talk, dream, scheme and sometimes argue about what we wanted to say. I love these conversations with Bob, and the added pressure to come up with a coherent presentation forced us to dive deeper than normal. He told me more about his experiences building guitars over the past 45 years, and I told him more about my life’s odyssey in environmental policy circles. I also spent a lot of time with our marketing team to discuss the emerging story so they could develop an effective visual presentation. The end result was not only a great speech but also an enhanced understanding here at the factory about what we’re trying to do with regard to sustainability, and where we want to go in the future.

Ultimately, we divided the presentation into two halves. First, Bob talked about the guitar itself — its component parts, the history and rationale behind wood selection, and what the guitar has come to symbolize in popular culture. We also talked about the considerable changes in the external world over the years and how this has influenced how Taylor makes guitars today. Next, we talked about specific sustainability initiatives, including The Ebony Project in Cameroon and our work with koa in Hawaii via Paniolo Tonewoods, our partnership with Pacific Rim Tonewoods (PRT). Bob also discussed some of the great things being done by the folks at PRT, who are engaged in some fantastic work with an eye toward Big-leaf maple restoration in the western U.S. Finally, we talked about our early-stage work to raise the profile of a greatly underappreciated natural resource: urban trees (city trees), their disturbing decline worldwide, and the untapped value in the urban wood waste stream when these trees eventually must come down. We’ll be talking more about this in the months to come.

I learned a lot in those preparatory conversations with Bob. Some things I already knew, like the fact that guitar manufacturing worldwide uses a very small percentage of the global trade in any given species. I estimate less than one-tenth of 1 percent. This said, our industry does tend to use higher-quality wood. I also understood that over the past several decades, the guitar itself has become a cultural totem, a beloved object that can transcend political, cultural and language differences. For more than a century, it has been used to tell our stories, express our heartache and desire, and protest injustice, with guitar riffs that have become the shared soundtrack of our lives. As the average acoustic guitar is composed of four or five different species, both tropical and temperate, I also knew that the continued existence of the guitar as we know it is dependent upon healthy forests around the world.

What was new to me, however, was the history of wood selection for musical instruments. Both Bob and Andy Powers spent time with me to explain it. Simply put, if you peer back into history, you’ll see that many instruments were developed using whatever wood was locally available and had appropriate characteristics for its role with an instrument. Violin makers use spruce and maple partly because that’s what grew near the people who made the first violins. A sound was created, and a tradition was born.

Mahogany necks were introduced on steel-string guitars in the early 1900s when the makers of wooden molds for iron foundry castings and the furniture industry were bringing so much high-end mahogany into New York that it made sense for companies like Martin to replace Spanish cedar with it, given its similar characteristics and abundant local availability. In the early 1900s, when Gibson was in Kalamazoo, Michigan, their craftspeople designed and built instruments with plentiful and locally available birch, maple and spruce, with only sparing use of imported woods like rosewood since those were not as easy to come by due to the difficulty and associated cost of transportation.

As the story goes, Leo Fender popularized ash for electric guitar bodies in the early 1950s because that was what Southern California furniture makers were using. Ash met the basic specifications Fender was looking for, and it was readily available and inexpensive. Leo added alder to his repertoire as a second wood choice thanks in part to a nearby furniture factory that went out of business and liquidated its alder supply. Thus, a tradition of building ash and alder Fender guitar bodies continues to this day.

In short, the history of sourcing tonewoods for musical instruments was not driven by an exhaustive analysis of far-flung species from around the world. The true history is more happenstance and practical. Instrument makers bought the wood that was affordable and readily available, either grown locally or brought to their region by other larger industries. Of these species, certain ones were chosen due to acoustical considerations, physical properties and workability, as each instrument part must perform a specific function. For example, wood for a guitar top must be lightweight, strong, flexible and springy, like an airplane wing. Wood for the back and sides must be stable and reflective. Fingerboards must be hard, resistant to wear, and capable of holding metal frets in place over time. A guitar neck must be made with stable wood that won’t warp or twist. Additionally, wood is selected for its workability with hand and power tools, and for how it reacts when different lacquer, polyurethane and oil finishes are applied. In other words, mahogany is not the king of woods due to a marketing campaign. Its reputation is built on its fantastic stability and woodworking characteristics, and sometimes lesser-known species are lesser-known because they simply can’t perform a specific functional purpose and/or do not have satisfactory woodworking qualities.

When Bob started building guitars in the 1970s, he simply went to the local lumber yard and found the species he needed. Instrument-quality wood was still available and already cut into suitable lengths to service larger industries. Bob, like builders before him, was buying from wood brokers who were servicing larger manufacturing sectors. It was interesting to hear him say that he first noticed changes in his traditional spruce supply about the same time that Southern California airplane makers switched from spruce to aluminum. This comment is noteworthy because it characterizes an important change facing the music industry in recent decades.

For over a century, tonewood sourcing was largely how it had always been, but in the 1980s and ’90s, with the escalation of global forest loss, things started to change. You see, when, for any reason, the supply of any given wood became unsuitable for the larger industry, that industry simply moved on to either another species or to an alternative material. For example, spruce airplane wings morphed into aluminum. Mahogany cabinets become oak. But for instrument makers, such change is not so easy. The industry likes tradition, and our technical specifications are more exacting. Besides, the world doesn’t want an aluminum and oak guitar.

I’ve spent much of my adult life in environmental policy circles, while Bob has spent his building guitars. It was interesting to compare the changes that occurred during the course of our careers in the policy and law that governs natural resource use, and in public awareness and consumer expectation. For most of my career, I was trying to effect change while Bob was living the consequences. And a lot changed in the span of our lifetimes. In many ways, during the first half of Bob’s career, things were kind of like they had always been when it came to sourcing wood, but then things slowly started to change. And that change has intensified in the second half of his career. As he once told me, “I’m stepping through the door from how it’s always been to how it now must be.”

I’ll give a few examples of that change. A milestone moment came in 1992 when the Convention on International Trade in Endangered Species (CITES) listed Brazilian rosewood on Appendix I. The 1990s also saw the emergence of forest certification and the birth of the Forest Stewardship Council (FSC). I was once on the FSC’s U.S. Board of Directors. In 2002, Big-leaf mahogany was placed on Appendix II, heavily influenced by a multiple-year Greenpeace campaign that I was intimately involved with. Then in 2008 another major milestone came when the U.S. amended the Lacey Act to include forest products — I had a minor hand in that one, too. The law holds U.S. importers responsible for wildlife products that were illegally taken, possessed, transported or sold prior to being imported into the United States. Similar-themed legislation followed in Australia (2012), the European Union (2013), and Japan (2016). By this time, the realization of climate change was really starting to take hold in the public consciousness, and major corporations began signing various public proclamations claiming they would avoid deforestation in their supply chains. These moments didn’t occur in isolation. Bob Dylan was right in more ways than he knew back in 1963, for the times they are a-changin’.

So, thank you, Society of Conservation Biologists, for inviting us to speak. You helped us organize our thinking. The guitar really has become a cultural totem, and at times an emotional lightning rod in the growing political storm of environmental politics and the increasing societal expectation for transparency and ethical business practices. The guitar has always been used to tell the human story, so we’ll use it to keep telling ours. In the words of Spider-Man’s Uncle Ben, “With great power comes great responsibility.” 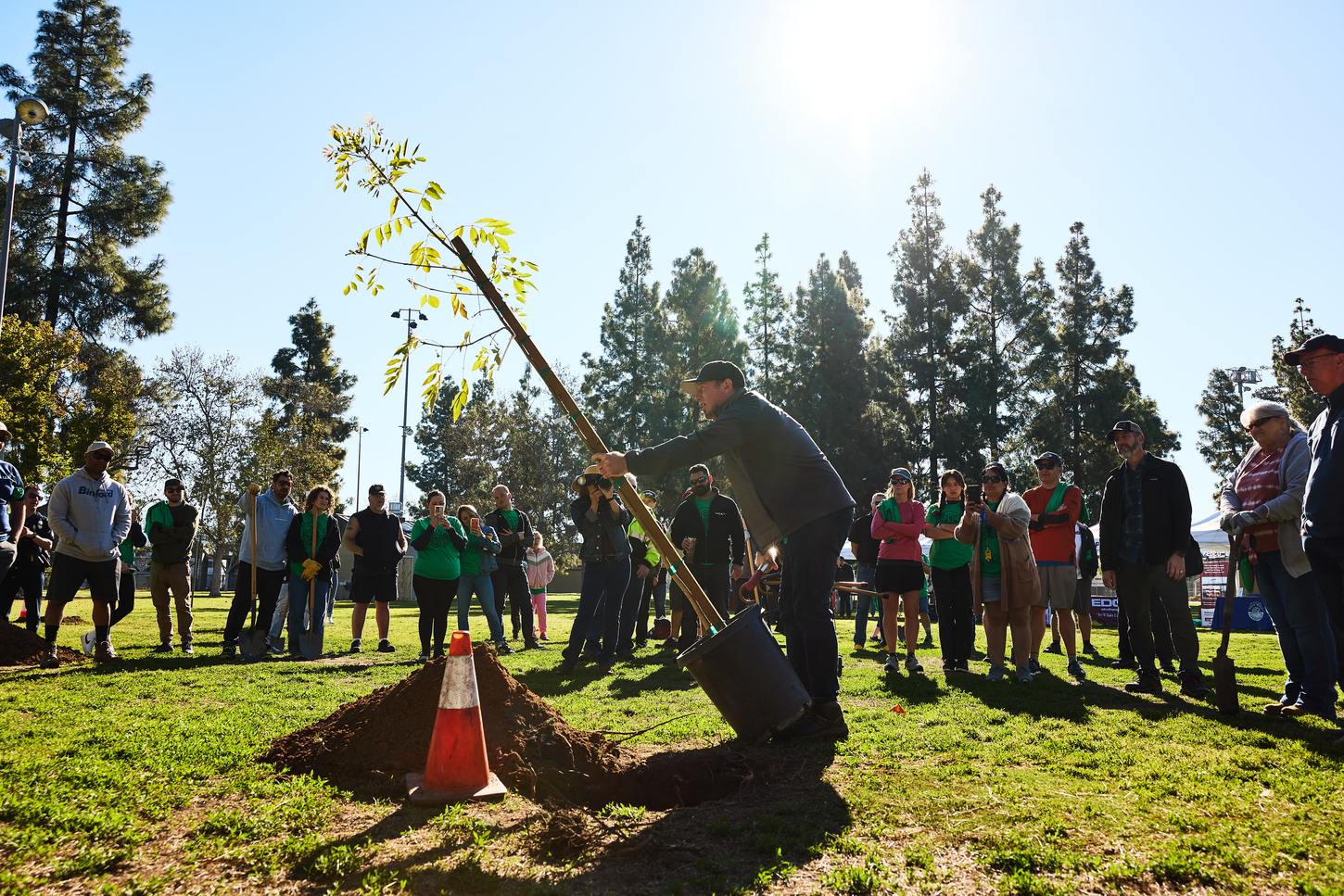 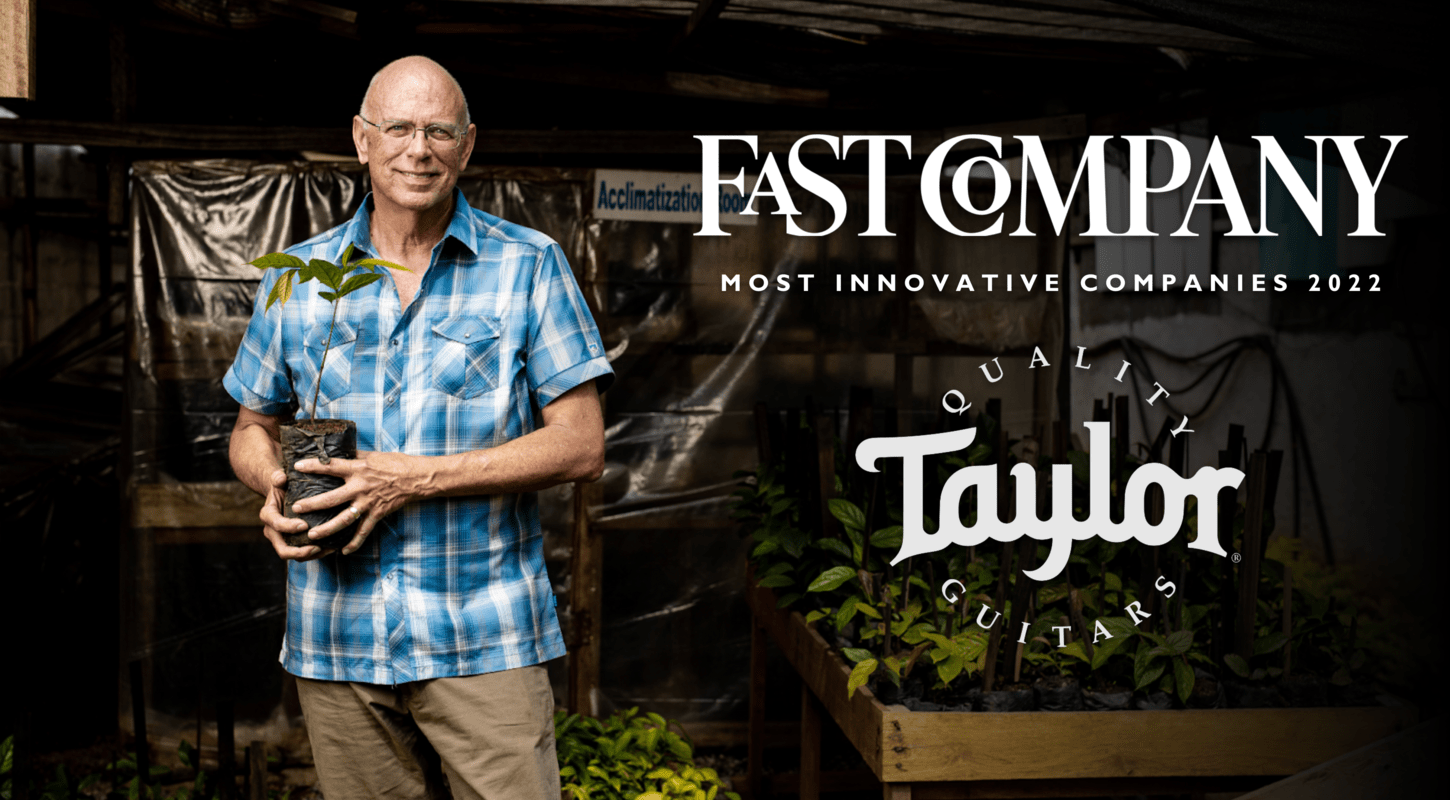