Since its debut in 2014, Taylor’s onboard Expression System® 2 (ES2) pickup/preamp has been the featured acoustic electronics package on many Taylor acoustic models. The patented Taylor design uses a breakthrough behind-the-saddle placement of piezo sensors to capture more of a guitar’s natural, dynamic properties. Here are five reasons why players love it.

When you plug in at a gig, the last thing you need to worry about is struggling to get a good amplified sound. Especially if you’re playing a small club or an open mike night, where you might only get a quick line check, or where the sound system might be less than stellar. The ES2 was designed to be compatible with a broad range of plugged-in settings. It sounds great with lots of different acoustic amps and PA systems, and it’s easy for a sound person to work with. For more on using the ES2, see our Tech Sheet.

Sometimes an acoustic guitar’s electronics add artificial tonal characteristics that cause the amplified tone to sound less natural. This can prevent the nuances of the player and the guitar from coming through clearly. The ES2 was designed to be as transparent as possible, so the musical character of your playing and your guitar project clearly. “It should never be about the pickup,” says Taylor pickup developer David Hosler. “It’s really meant to be invisible, so the guitar and the player can be the star.”

For more on the ES2’s development, see the video below.

3. The tone controls are simple but effective.

While some guitarists love twiddling knobs to manipulate their sound, most prefer a simpler approach. The ES2 boasts a studio-grade preamp that does all the heavy lifting for you, so the three tone controls on the guitar — Volume, Treble and Bass, from front to back — streamline things, yet still give you plenty of tone-shaping capability for different musical scenarios.

4. Your guitar will play well with others.

One of the qualities of the ES2 that makes it easier to hear in an ensemble setting is its ability to cut through a mix with other instruments. Taylor’s David Hosler elaborates on what that “cutting” quality means: “Because of where we’re capturing the sound, there’s a front edge to it,” he says. “Because the ES2 captures that front edge in a plugged-in situation, it pushes the guitar sound forward in the mix. And sound systems and mixing engineers like that front edge. It’s not mushy either, like a typical under-saddle transducer often can be. An under-saddle transducer also can get so distorted on that front edge that after a while you don’t want to listen to it anymore because it fatigues you.”

5. It gives you a great option for recording.

While the best way to faithfully capture the sounds of your acoustic guitar when recording is to use a quality microphone (often a stereo mike setup), the ES2 provides such a good direct signal that players and recording engineers rely on it as another viable source for recording. Longtime Taylor player Jim “Kimo” West, a prolific Hawaiian slack key guitarist who also has toured with “Weird Al” Yankovic since the mid-1980s, loves how the ES2’s signal enhances his acoustic recording capability. “I typically never use a direct signal when I record, but because of this system, I started using it mixed with the mike,” he explains. “I usually use a stereo mike setup, so on my most recent CD, I recorded with two mikes and used the third channel for the direct and mixed some of that in there. It definitely improved the sound.”

Taylor’s 300 and 400 Series models are now offered with ES2 electronics. 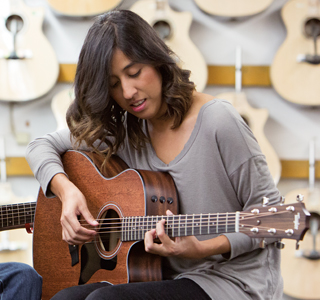 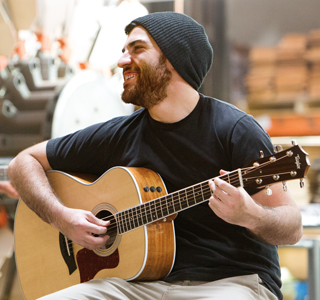 Oct 25, 2021
By: Taylor Guitars
When we first launched the American Dream Series back in 2020, we set out to… Continue Reading

How To Put On a Guitar Strap

Oct 18, 2021
By: Taylor Guitars
A guitar strap is your ticket to full mobility. Whether you’re standing up at the… Continue Reading