I like good stuff. I like things that are beautiful, well made and functional. That doesn’t mean I don’t buy some cheap stuff here and there, or things that are good enough. It’s OK for things to be good enough, to serve a purpose, to have their cost appropriate with their use, and to leave some money for other things. But what if everything you owned in your life was just good enough?

I depend on other people to like good stuff, or I wouldn’t sell many guitars. Sometimes you spend more money to get something you’ll really love and enjoy, and use for years to come. There are even things that will last you a lifetime and that you can hand down to your kids, just because it’s that good. Compare that to something you buy and soon toss in the trash because it doesn’t work, was faddish, or serves no purpose any longer.

One day, after doing a favor for friend of mine, I received a gift box in the mail. In it was a William Henry pocket knife. I opened the package and was completely blown away. It has become one of my prized possessions. The design and craftsmanship are superb, and anyone who sees it just stares at it; opens it, closes it, turns it, looks at it from the ends, top, and sides. They ask about it, they want to know what the materials are. You notice the gem stones, the pearl, the Damascus steel with its unique patterns. The body is made from Mokume, steel laminated with copper, or some other yellow metal. It’s beautiful.

I now have a smaller one, like a pen knife size. I have to remember to take it out when I board a plane. I might have to buy a plane so I can carry my knife. I don’t want to go anywhere without it.

I began to email the owner of the company, Matt Conable. Guess what? He’s a Taylor guitar owner! We became friends. We traded some stuff, good stuff, my good stuff for his good stuff. He plays music, lives in Northern California and surfs. He came down to visit, and he’s more handsome than me; younger too. He looks like the Camel man or the Marlboro man, only without the lung cancer. He’s a very nice guy with a talent for designing and building these knives that qualify as man-jewelry.

In fact, he sells his knives in jewelry stores rather than in a hunting counter at the sporting goods store. Celebrities like his knives. Once a quarter he makes a couple hundred “one-off” custom knives and sells them on a first-come, first-served basis through his website. He gives you a one-week warning that they’ll pop up for sale so you’ll be ready. The website goes up, and all the knives are gone in an hour. These are knives that cost $1,000 to $2,000. People buy them because they are that good.

But wait, there’s more! Matt and I started talking one day. He was thinking that perhaps we could co-brand something. Maybe make an LTD guitar with a knife included. That’s always the first idea, but rarely the right idea. Maybe a guitar tool, or maybe not. The “good enough” guitar tool is probably good enough. He mentioned his money clips, and what we could do with that. I suggested he design a money clip that also holds guitar picks. 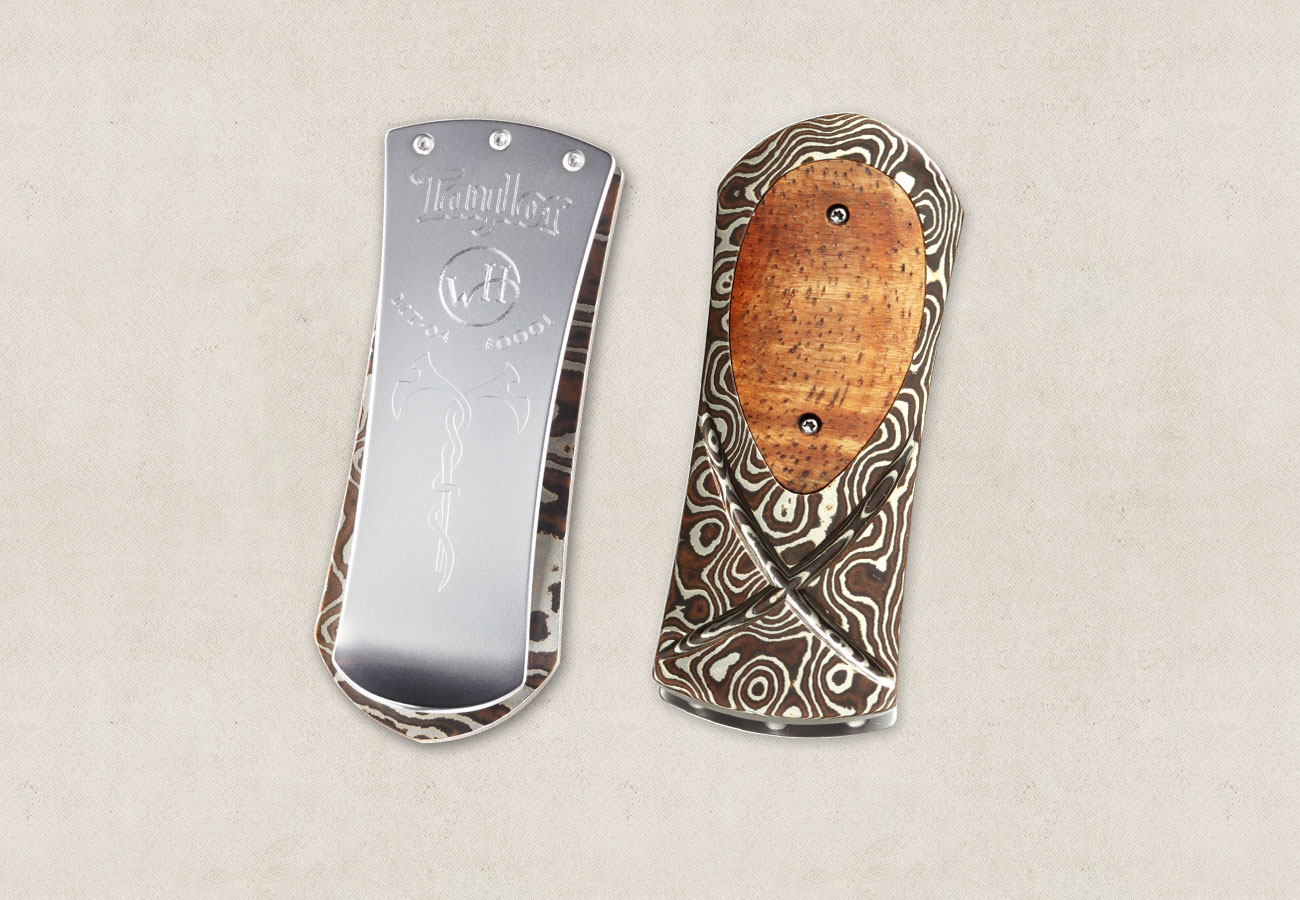 With our next issue of Wood&Steel you will be able to buy these from TaylorWare. I’m telling you, they are so cool, so nice. They’re nice to look at, to hold, to use, to show your friends. It’s a friend-maker. I’ve had prototypes on my desk for weeks. I had an investigator from Homeland Security, doing a background check on someone, come into my office to interview me the other day. He kept going back to the money clips, taking notes about when he could buy one. It was hard to stay on task with those on the desk.

There are a couple designs. One with a pick holder and one with a sort of pick-shaped wood inlay made from polished guitar woods that we send up to Matt. The one with wood doesn’t hold picks, and the one that holds picks doesn’t have wood, since there is limited space on a money clip. They’re both really nice and they cost what they should cost, about $200-$300, like any nice piece of jewelry. They’re rugged, they’re cool, and they hold picks!

Look for them in TaylorWare. We’re trying to get them before Father’s Day, so all you kids can chip in and buy one for dad, or dad can buy one for himself and not get in trouble.

I was thinking that I’m going to turn you on to other cool things as I find them. I probably won’t sell them all like I’m doing with this, but everyone likes to hear about something that is really nice once in a while

Oct 25, 2021
By: Taylor Guitars
When we first launched the American Dream Series back in 2020, we set out to… Continue Reading

How To Put On a Guitar Strap

Oct 18, 2021
By: Taylor Guitars
A guitar strap is your ticket to full mobility. Whether you’re standing up at the… Continue Reading